Several years after staging The New Danse Macabre in Wellington, New Zealand, I had become part of the regular faculty of the Stamping Ground Festival of Dance and the Action Arts in Bellingen, Australia. Stamping Ground was the brainchild of veteran dancer/ choreographer Peter Stock, who wanted to encourage greater participation in the movement arts by men and boys.

First held in 1997, the annual event had quickly evolved into a huge, free-wheeling festival of classes and performances taking place all over Bellingen, which is a lovely little river town about mid-way between Sydney and Brisbane. The general spirit of the event was one of benign anarchy; there was a busy daily schedule, which was generally reliable, but it paid to keep your ear to the ground so as not to miss the spontaneous happenings (in the best ’60s sense) that also marked the Stamping Ground experience.

During the 2003 event Peter asked if I could come up with a large-scale performance as a free Wednesday evening “thanks” show for the locals, who were generally very tolerant with regards to being invaded by hordes of dancers and circus folk. With only a few days notice and virtually no budget nor (as I realised once I’d re-consulted my teaching schedule) free time, I happily set about re-conceiving the Danse Macabre as a one-off, site-specific theatrical event featuring a cast of about thirty professional performers.

Lacking many other resources, I was lucky enough to be provided with an assistant. She was in her early 20s and on secondment from a technical production course from one of Australia’s major performing arts academies. I was grateful for her logistical help, ingenuity and relatively open schedule – essentially, I described my ideas to her when we could catch up during the day (neither of us had cell-phones, as I recall) and trusted that she’d somehow make them happen in the interim. To this day, I have no idea how she was able to accomplish what she did under those conditions.

It was impossible to arrange a proper rehearsal because all the tutors were committed to teaching their own classes during the days and performing in the early evenings. The only time I was able to wrangle to get everyone together was during our lunch-break period the day before the show. I remember that one of the tutors, who was from the Caribbean, had a cultural objection to “dancing as death”, but he did feel comfortable drumming as part of the performance. Another, of Koori (Australian Aboriginal) descent, began a fascinating rumination on his own perspective on death spirituality, leading to an animated discussion which I seriously regretted having to cut short due to sheer time pressure.

With the clock ticking, we managed a short conceptual chat, focusing on the ideas of a death-positive festival vibe and on the uncanny perspective of the skull-faced revenants, then did a single group walk-through of the performance, during which I described my vision for the audience’s experience. At that point we’d run out of time and went our separate ways. The entire project was a massive trust exercise – much of the event would, by force of circumstance, be left up to serendipity. I had faith that all my colleagues would honor the sentiment of the Danse and could improvise accordingly.

The afternoon before the Danse Macabre I was contacted by a chalk artist who’d been tasked with creating a sign advertising the event. He asked for an image and I suggested a skull with a rose in its teeth. Later that evening, as I approached the Memorial Hall venue, I was a bit nonplussed to see a chalkboard sign bearing a picture of a skeleton lying in a flowerbed, but it was beautifully drawn.

Here’s a description of the Stamping Ground Danse Macabre from an audience member’s point of view:

We entered the Memorial Hall and sat down, but there didn’t seem to be any performers there. The lights were all on and it all felt a bit empty – we were wondering if we were there on the wrong night. The seats were full of spectators but where was the show?

Suddenly we heard drumming and flute music from the foyer. We turned around in our seats and three people masked as skeletons walked in to the hall. They went straight down the aisle, drumming and fluting across the empty space in front of the stage and out through one of the side-doors. A guy from the audience started to follow them – he got to the door and looked out, then turned around and beckoned for the rest of us to follow, so we did.

By the time I got to the door I could just see the skull-musicians disappearing down a winding path that led away from the hall and into a stand of trees. All along the path there were candles and I saw more skull people off to the sides, dancing, and one lurking up in a tree.

We followed the musicians into the forest. It was getting dark but there were more candles and fire torches stuck in the ground. We wandered around and everywhere we went there were more skull people. Two of them were dancing the tango. There were jugglers spinning crystal balls next to skull-faced dancers playing capoeira. I looked up and one was doing acrobatics on a big loop hanging from a high tree branch. Others were drumming and one was doing magic tricks with fire. 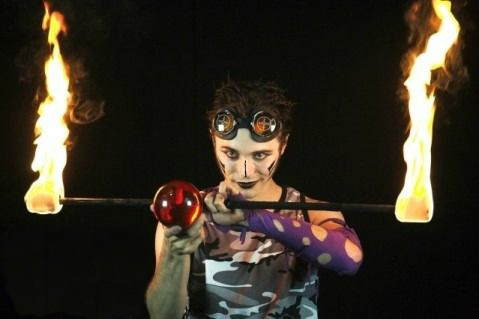 Then after a while, we heard a call – “coooo-eee! Coooo-eee!” – and all the skull people started calling too, and then they all moved towards a different part of the forest. We followed them until everyone was gathered facing a kind of altar. The centerpiece was a big mirror propped up against a tree trunk and draped with fabric. There were river stones piled all around the ground by the mirror, with candles and flowers.

I wasn’t sure what to do, but then the skull people started humming and that developed into a sort of chant – “Away, away – away, away – away, away, e-la, e-la, e-la”. A guy approached the altar and put something down near it, and then others started to do that, and pretty soon everyone was finding things to offer. I picked up a leaf and as I walked towards it I saw myself reflected in the mirror in the candle-light. I put my leaf with all the other offerings – leaves and pebbles and coins and pine cones – and went back, and then after a while people started to drift away.

But about an hour later I was in the main street and I saw a group of cosmics (local hippies) all shuffling along together in a group hug, making their way back up from the forest, still chanting. It looked like they didn’t plan to let go any time soon.

Scroll back to top